Right now I am at home in Croydon and after spending the day looking after my 2 daughters I made some time to finish off/polishing a couple of mixes on two new tracks which I’ve been working on over the last 2 weeks, I’ve got a couple more lined up that need a relisten and a rework, but I’m happy with the compositional elements and the tracks in general, so no more creativity, just a decent mix and they’re done. It’s been quite a good month musically and I’ve been finishing a track a week. Roll on next week and some new ideas. In addition to making music I recently started a podcast, Daverage Normal’s Average Podcast Show, where I interview other new and growing artists about them, some of their music and discuss the creative process behind the track. I’ve really enjoyed meeting people and hearing music I wouldn’t have otherwise come across, and also sharing the experiences and challenges we have of getting our music heard.

I was introduced to classical music when I was young and played the trumpet in orchestras and brass bands, following which I picked up a bass guitar and have played in a variety of punk, rock, grunge, and funk bands. I started to dabble in electronic music in my early 20s, on and off, but really developed a keen interest in devoting much more creative effort into it over the last 2 years. The influences I draw upon will be subconsciously deep-rooted in the music I was playing over this time, and now when I listen to music, I find myself trying to dissect every track so I can learn as much as possible in terms of form, structure, feel, and aesthetic. I don’t find myself drawn to any artist or genre as much as I was when I was younger. Generally, I am drawn to themes that are darker, melancholy, and quirky. When I sit down to write, there isn’t always a definitive idea at the helm, I like to explore, experiment, discover and expand on an idea that captures my feeling, though I imagine my state of mind at that time will dictate the direction those changes go in creating an energy-driven piece or one of a yearning sense of displacement. That said, I do have a soft spot for retro/cyberwave, industrial, and drum and bass, and also Primus.

Tell us a bit about your gear (synth/software).

I used to use Logic but moved over to Ableton in the summer and am loving the speed at which you can develop ideas within it., though I still go back into Logic when it comes to mixing, doing it in that fashion separates the creative mindset from the analytical process for me and I don’t get distracted, too much, by trying to engage a new idea halfway through a mix. My favorite synth is the Novation Bass Station 2, I use it nearly all the time for bass, leads, or whatever I can squeeze out of it. Alongside that I have a Novation Mininova, the only thing that lets it down is the menu diving, but there is a VST patch editor, however Ableton and Novation should have a chat and fix the GUI issue so its useable in Live 11. Again, this is a versatile synth, with added performance controls that you can design modulations for to add spice and variation to a riff. I have the Arturia Microbrute, where you can’t save any patches so it’s very much a dial in a sound, record it and move on, and also a new addition which is the Drumbrute Impact. My favorite VST synth is undoubtedly Serum. You can do so much with it, and it sounds awesome, coupled with Cthulu you can find some really great riffs and hooks. It is a powerhouse in and of itself and I will go as far to say that you can pretty much just use that one VST and not need anything else.

I went through a phase convinced or maybe I convinced myself, that my consciousness was slipping into numerous parallel universes where the only differences were incredibly subtle and trifling. For example, not being able to find where I left something because it was in an entirely different place that I would not have left it in, but in this universe, the only difference was the placement of my keys. That and the blue sky business, I’m still not over that.

If you could go back in time and make music which era would you choose and why?

Aside from the risk of irrevocably changing history or causing a paradox that corrupts the spacetime continuum and brings all known existence to a halt, who would want to go back in time? The past was the worst. From a creative perspective, now is the best time to make music. The tools that we have and the accessibility to creativity are boundless. You can start making music with an OK laptop and headphones, and you can share that music with the world, whether anyone listens is another question entirely, but the fact that you can do that without needing access to expensive facilities, is why NOW is the best time to be creative. The development and advancement of music technology over the last 15 years has really leveled the playing field.

It’s a rapidly changing landscape at present, the development of NFTs has impacted the visual arts immensely and I see and hear people talking about its application to music. It may have already happened but to be honest, I’m not into the whole NFT thing anyway, even though some people will be finding significant success, they will remain a minority as wealth can only exist as a comparative factor in society, and the only motivation behind an NFT is financial. And this brings me to my point, the idea of seeking only wealth or fame through music is misguided in my opinion, and you can draw that into any artistic process. As our world moves ever more online, content creation will always be needed, from a musical perspective there will always need to be someone making library music, music for TV, Film, and video games, people creating patches, sample packs, and sound fx. From that perspective, it’s great and works well for the music production industrial complex. For artists who choose to create for the sake of it, getting heard will become ever more challenging, and finding your voice loud enough to shout across that crowded room will take more and more energy and time away from the process of creating. Spotify currently uploads, 60,000 tracks per day, and that is expected to grow to over 350,000 by 2025. The amount of choice available is already overwhelming, and it will continue to become so.

Ultimately, I am not doing anything different or pushing any boundaries, I write music that I enjoy writing, be it a cyberwave influenced idea or a fast-paced drum and bass track, or whatever takes my fancy at the time. And that’s it, I just enjoy making music, for the sake of making it. Yes, I do release music and try to shout about it but my motivator is an intrinsic one. We are all individuals, and the fact that I am who I am is the one thing that separates me from other artists. 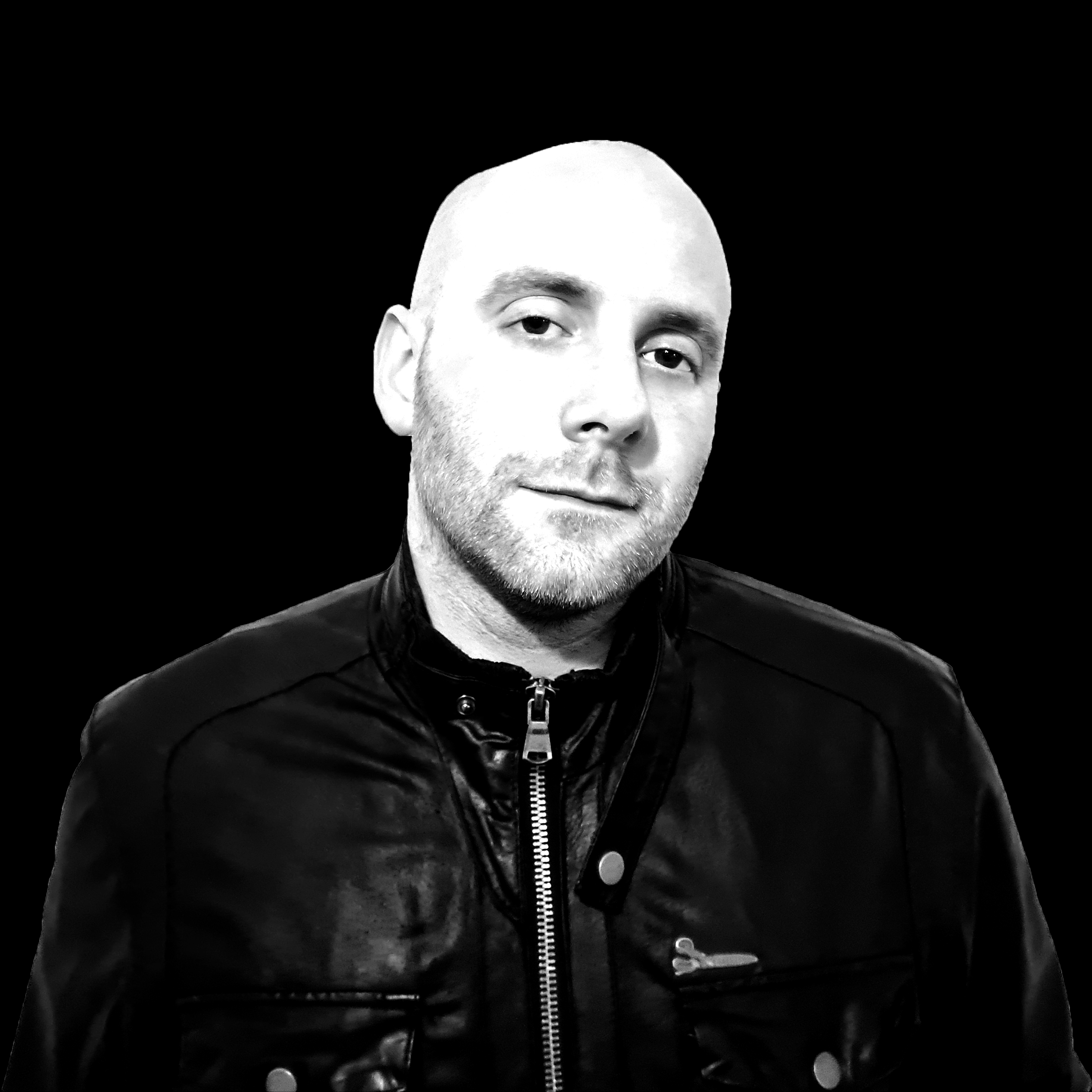 You have some amazing artwork along with your music, who designed those?

I have had some work created for me by @bunnybreaker we share an old friend, they also created the 3d visuals for my recent release At the Precipice and the cover for General Dysfunction. Also, Bright Light in the Dark created the cover of Decompression (brightlightart.net). On top of that, I’m not very visually attuned, but I have taken to using Wombo AI and then using apps like Glitch Lab to animate and add effects so I can upload more visually appealing content to entice existing and maybe even new listeners in. For other EP and single covers, I’ve used Kapwing as a resource.

Do you play video games? What is your favorite and would you write music for one?

I do like video games and have whiled away many a day in different worlds. My top games were Battlefield, GTA and Skyrim, and generally anything in space, especially where a ship with lasers is involved. My pal @bunnybreaker has been designing a game and my tracks are the music for it and although it is still in early development, you can play a demo (on PC) here. I like the idea of creating music for video games, but I am under no illusion that video game composition is an entirely different skill set compared to knocking out a track over the weekend.

My most recent release was At the Precipice, a bold move (I am told) of an EP a 12-minute concept expressing stages of insomnia. The track is comprised of three movements, "Approach" which has an ominous yet dreamy aesthetic, painting a picture of movement and weariness and an impression of tiredness where as much as you yearn for a resolution, it never comes. "Engage" continues with a laid-back feel, however, it lifts you up into a more driven and at times manic state of mind as you accept sleep will not come and you must power through regardless of the whispers at the back of your mind. And "Descent" takes you back to a sense of calm which quickly ramps up into driven energy of determination, but always hinting at an undercurrent of yearning and the disconnectedness of a tired mind. It’s a ride, a journey, and it is a big ask these days to expect someone to commit to a 12-minute listen, but I promise you it’s worth it. Thank you.