For the friends of: Jamiroquai, The Avalanches, Caribou

Favorite track(s): 'Keep Moving', 'Talk About It' and 'Truth'

'Dry Your Tears'
Basically just an intro to the first track and the album. It really resonates the whole soundscape and atmosphere but not yet giving it all.

'Keep Moving'
The track slowly slides into where Jungle is strongest; danceable, cool and catchy music full of soul and energy. This track has really great string arrangements and the disco vibe is strong. If Bee Gees would still be around making music they could sound something like this. The theme of the song is repeating a lot, making this really stick in your head. Definitely one of the best tracks of the album.

'All Of The Time'
The second actual track continues with the dance tunes but takes another step forward. Slightly faster track with brilliant and varied vocals. This track is pretty much like a train that never stops but just keeps going no matter what happens.

'Romeo' (feat. Bas)
I think this might be the first track for 'Jungle' using a featuring artist. I remember when this was released, I was slightly surprised. I liked the laid-back flow and beat, but I was wondering how this would fit in the album and the style of the band. But actually, this really has its place, not having any doubts about that.

'Lifting You'
If the first two tracks are kind of a pair, I would think 'Romeo' and this track is also a pair. 'Lifting You' continues with the laid-back feeling with very soulful synthesizers and guitars. Not the best track of the album but I've still never have skipped this. Again one of those 'Jungle' tracks that have a clear hook that is the base of the whole track. Not sure who is the singer, but it little bit reminds me of 'José Gonzáles'.

'Bonnie Hill'
I really enjoy the beat and rhythm of this track. 'Bonnie Hill' still continues with the more laid-back summer vibes, but somehow there is slightly more variation and different parts making this more interesting, having also more dynamics. The flute and saxophone solos are pretty much perfect while being also rude in a good way!

'Fire'
Starting slowly this track takes the beat back to a slightly faster tempo. 'Fire' has a feeling that it could have been build with different samples rather than played by a band. This could be a track by 'Dj Shadow' or 'RJD2' etc. Same time this sounds like 'Jungle' but I can't think of another 'Jungle' song that sounds like this.

'Talk About It'
I really love how this track starts very smoothly after 'Fire'. The beat reminds a bit of 90's breakbeat artists and DJs. There's definitely a lot the same with the first two tracks, strings, the disco vibe and again the momentum. 'Talk About It' is really all that 'Jungle' represents to me. The slow ending of the track is also a really cool choice. I really really wish to hear this track somewhere live. One of the best tracks on the album.

'No Rules'
This track has a certain hip-hop vibe built in it. It would be really cool to hear a remix of this track with some of the UK rappers. 'No Rules' is again a good track but just lacking something. This might also just feel a bit mild after 'Talk About It'. I am also not the biggest fan of the vocal arrangements of this track. But then again I like the percussion details of this track.

'Truth'
This has something similar to 'Romeo'. Not genre-wisely, but being just slightly different from what 'Jungle' normally sounds like. Again, when this was released as a single, I really liked this track but wasn't sure how it will find its place in the album. But more and more I listen to the whole album and 'Truth' more I like the track. This has actually become one of my favorite tracks of Jungle. It's simple but still flows perfectly. Everything has its place in the track, there is nothing too much or little.

'What D'You Know About Me?'
I think 'Jungle' has really tried many small new things with the album, this track being also one good example of it. Again this really sounds like 'Jungle' but same time looping and repeating the name of the track builds almost like a hypnotic world in the listener's head. In a way, it would be cool to have this track a bit longer still repeating the theme but building it bigger and more psychedelic.

'Just Fly, Don't Worry'
One of the more laid-back tracks of the album. Being also pretty short, this is almost like an interlude. The track could also be thought of as an intro to the next track which really slows down the atmosphere. To be honest, not much to say about this track.

'Goodbye My Love' (feat. Priya Ragu)
This is my least favorite track of the album. In a way, there is nothing wrong with it but it slightly feels like it is on the wrong record. Everything sounds really good, 'Priya Ragu's voice is beautiful with all of its delicacies. I think this track also shows the biggest challenge of 'Jungle'. They make so great, brilliant, awesome singles that even really good one songs might sound a bit mild compared to the best tracks. I think this track would work better being the last track of the album rather than having one faster disco track still coming up.

'Can't Stop The Stars'
Again really brilliant strings in the track. Like I wrote in the previous part, this is a bit funny choice to be the last track of the album. Otherwise, I really don't find any flaws in the track.

General
'Loving In Stereo' was one of my most anticipated albums of the year. 'Jungle's last album 'For Ever' was one of my top albums of 2018. I happened to see them also live six days after my firstborn came to this world. So the album really has a special place in my life. The first singles really promised a lot but, to be honest, first couple repeats of the album, I did not find it very interesting. It sounded good, but something else was what I expected. It did not sound bad, so I still ended listening to it multiple times and slowly I started to find myself nodding to the beat of the tracks and founding different details and dynamics. The best parts of the album really sound like some of the best music of the year, but as a whole album, I am not sure if the album will earn its place in the top 9 list at the end of the year. Only time will tell! 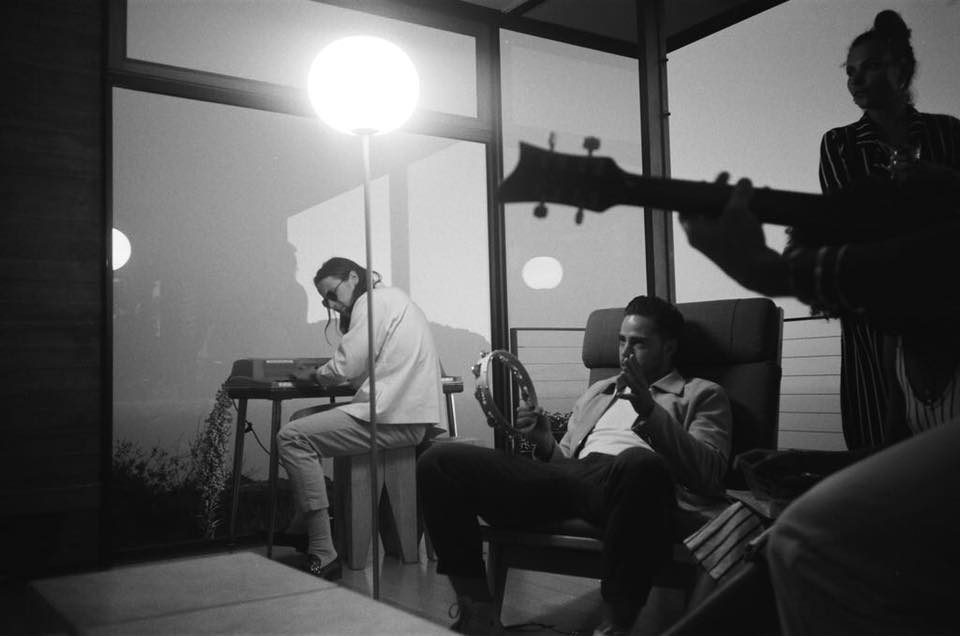 Listen to 'Loving In Stereo'