Like so many other festivals in Finland this summer, Flow Festival also set a new record for attendance. The sold-out festival gathered a record-breaking 90,000 attendees to enjoy the music, food, and sideshows during the three festival days.

During the weekend, the Flow Main Stage hosted performances by artists such as afropop superstar Burna Boy, the virtual group Gorillaz with their first ever performance in Finland, Florence + The Machine, and multiple domestic favorites. On Flow Festival’s Sunday, the main stage saw the phenomenal Michael Kiwanuka and the charismatic Nick Cave & The Bad Seeds with their two-hour set charm the audience.

Flow continued its trail-blazing work this year toward a more sustainable festival production by cutting red meat and poultry off the menus. The festival also compiled the Flow Talks program. On Friday, Flow hosted a panel discussion arranged with Music Finland and six other music industry organizations on advancing a more vigorous and international music industry. The panelists included Finland’s Prime Minister ‘Sanna Marin’, Minister of the Environment and Climate Change ‘Maria Ohisalo’, and chair of the Parliamentary Group of the National Coalition Party ‘Kai Mykkänen’, among others. Additionally, Flow arranged the Sustainable Meal panel on Sunday, in which a jury selected the most sustainable and delicious dish of Flow’s restaurants. The crowd’s favorite Sustainable Meal was also chosen by popular vote. The jury selected LoiLoi’s Tofu Okonomiyaki as their winner, and the crowd favorite was The Glass’ dish Common Roach & Potatoes.

The Finnish public service broadcasting company Yle and the French-German public service broadcasting company Arte have recorded shows and atmosphere at Flow during the weekend. Part of the recordings were live streams, but some of them can be viewed in Yle Areena. Recordings of ‘Gorillaz’, ‘Burna Boy’, ‘UMO & Jimi Tenor’, ‘Kit Sebastian’, ‘Vesta’, ‘Freddie Gibbs’, ‘Sigrid’, and ‘pehmoaino’ can be watched here.

Resident Advisor is an online music magazine and community platform dedicated to showcasing electronic music, artists, and events across the globe. It was established in 2001. It has had a DJ stage in Flow Festival already for a few years, and 2022 was no exception. One of the most exciting DJs of the whole weekend was ‘Uncle Waffles’, who comes from South Africa. You could hear the different beats and vibes in her set, than what you usually hear in Finland. She is only 22 years old but acted confidently behind the table. Her music is considered amapiano, which emerges from South Africa, combining house, jazz, and lounge with South African music styles. 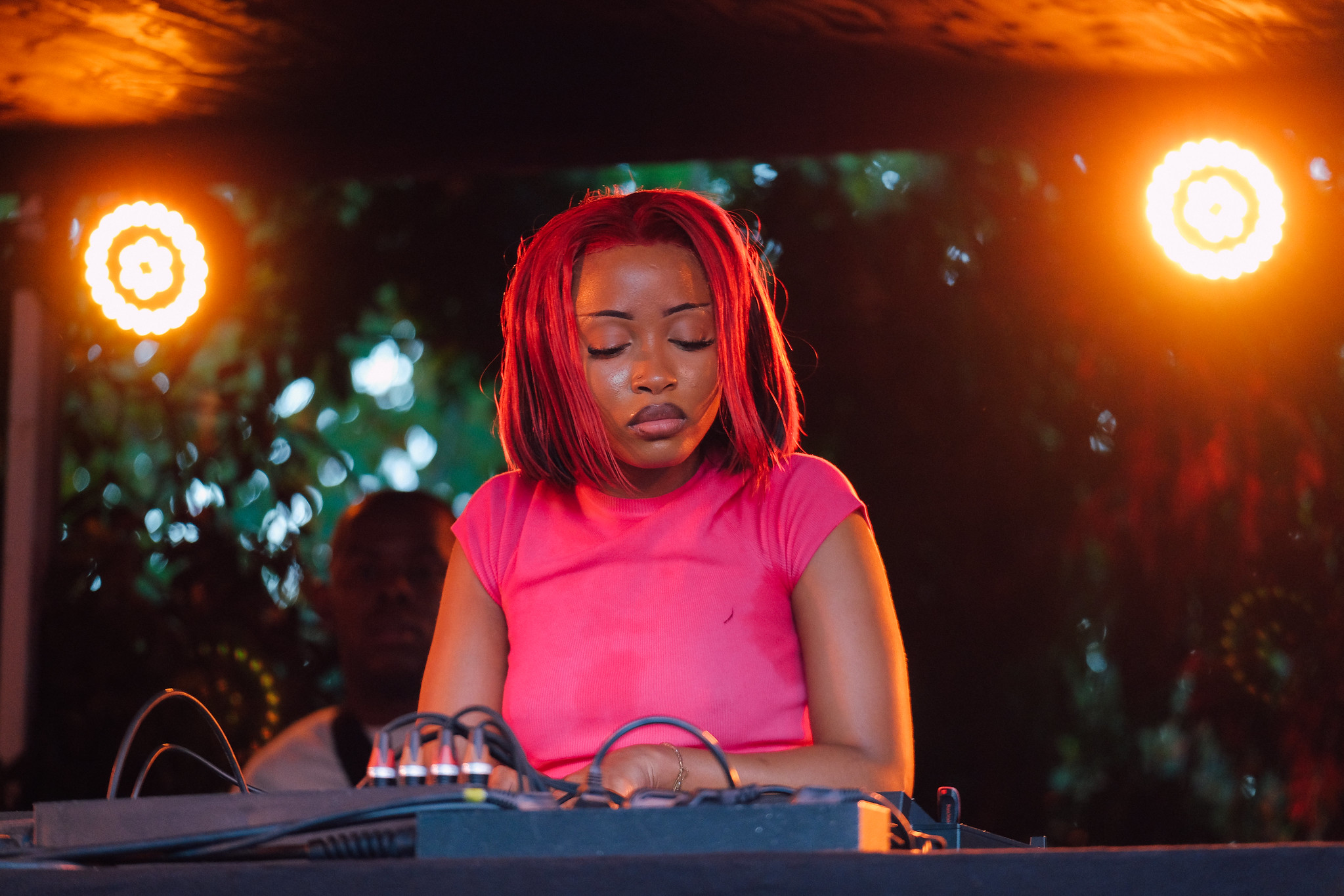 It was only seven pm when she started playing, but the crowd was already dancing from the first seconds. Her set included many nice percussion sounds, high and low-tuned basslines with few vocals. She was accompanied by two guys with ordinary t-shirts and bags, who looked like they were just enjoying the music, taking random videos, and looking at the crowd. Just like out of nowhere, all three started making dance choreographies, many times just for a few seconds. This was also an excellent and different thing from what you usually see in Finland.

Another great act from the continent of Africa. ‘Nihiloxica’ is a band that consists of two guys from the UK and three drummers from Uganda. Their music combines techno and the ancient Bugandan drumming tradition of Uganda. The band played at the 360 Balloon stage and suited pretty well there. Slowly people started to jam on the dark and heavy beats. It was the moment when one of the band members shouted on the mic, through massive echo, that you can’t dance if you are sitting when basically the whole crowd started dancing. It was a special moment. 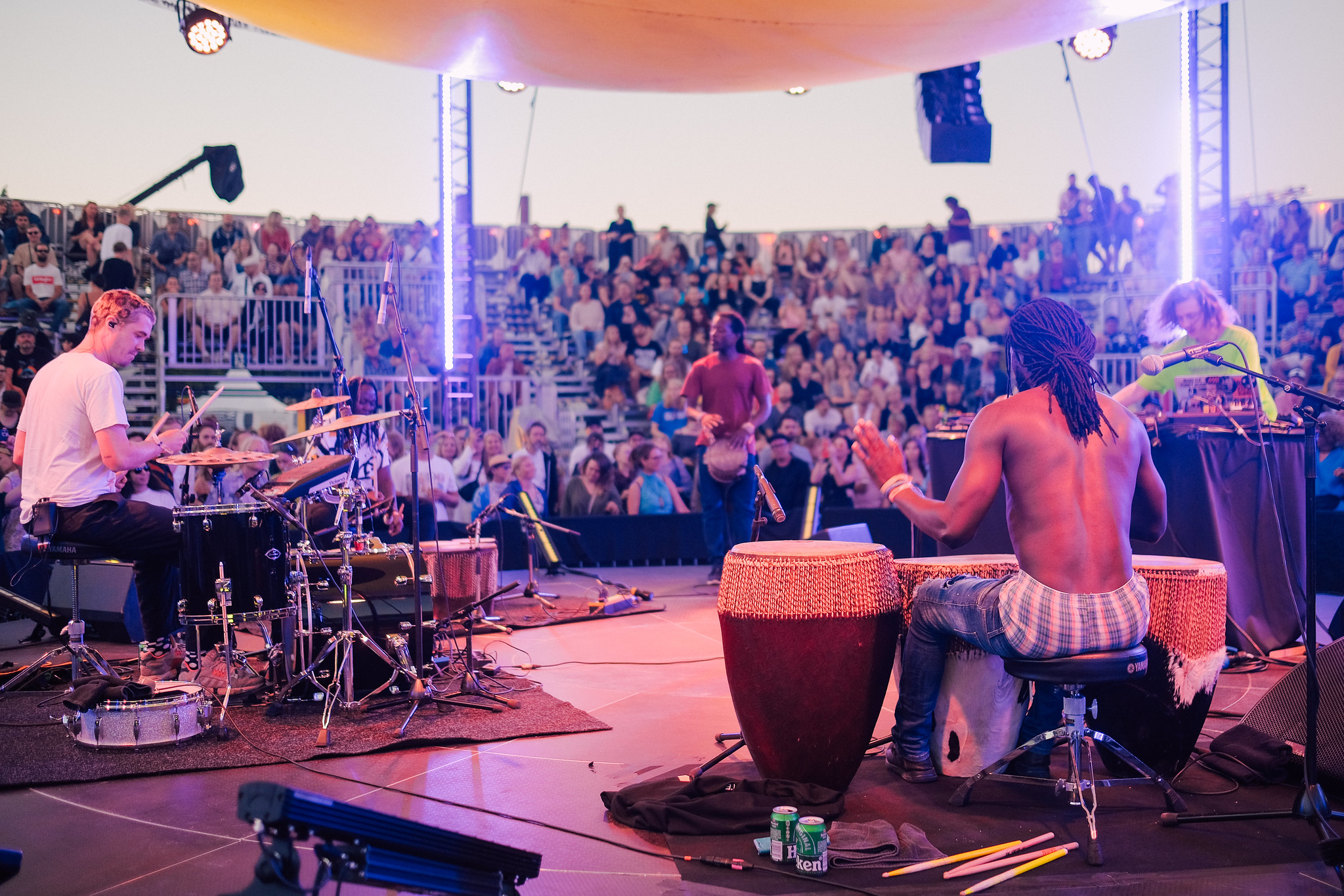 At the beginning of their set, the electro synths were mixed relatively low, but luckily all were in better balance soon. It is impossible to compare their music to anything I have heard before. I think this is the magic of combining two different worlds, which can create something unique and massive. The lineup consisted of four drummers, all with different drums and one guy handling electronic parts of the music. This is definitely music that you can enjoy live even if you are not familiar with their music previously.

Approaching the main stage, it was clear that many other people, including me, wanted to see ‘Gorillaz’, which was visiting Finland for the first time. I arrived at the main stage 15 minutes before the show started and getting anywhere close to the stage or even the pit area was impossible. 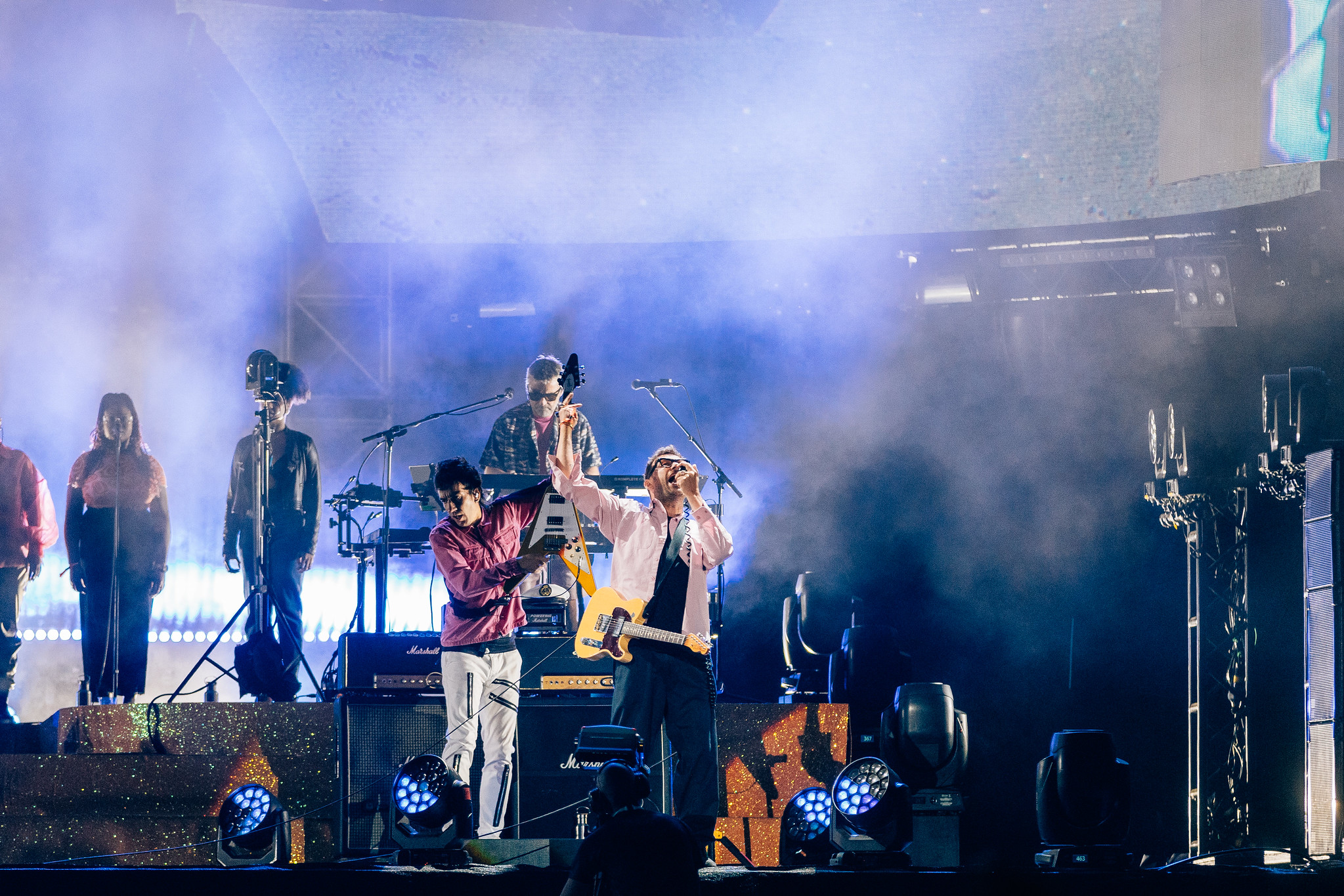 The show started with M1 A1, which was a perfect opener with the ‘Heeey, anybody out there’ shouts with massive HEI (hello in Finnish) text on the screens. The crowd responded with a loud scream while the band members, one by one, marched to the stage. It was clear already from the beginning that this would be an entertaining show. The stage had 12 members at all times, while multiple vocalists joined either through the screen or on the stage. ‘Gorillaz’ is known for the cartoon characters ‘2-D’, ‘Murdoc’, ‘Noodle’, and ‘Russel Hobbs’. They were definitely not forgotten and were a big part of the show. Some parts of the show included parts from music videos, and some parts were specially made for the show. Either way, it was entertaining to follow their adventures on the screen or watch the band perform under the giant screen. 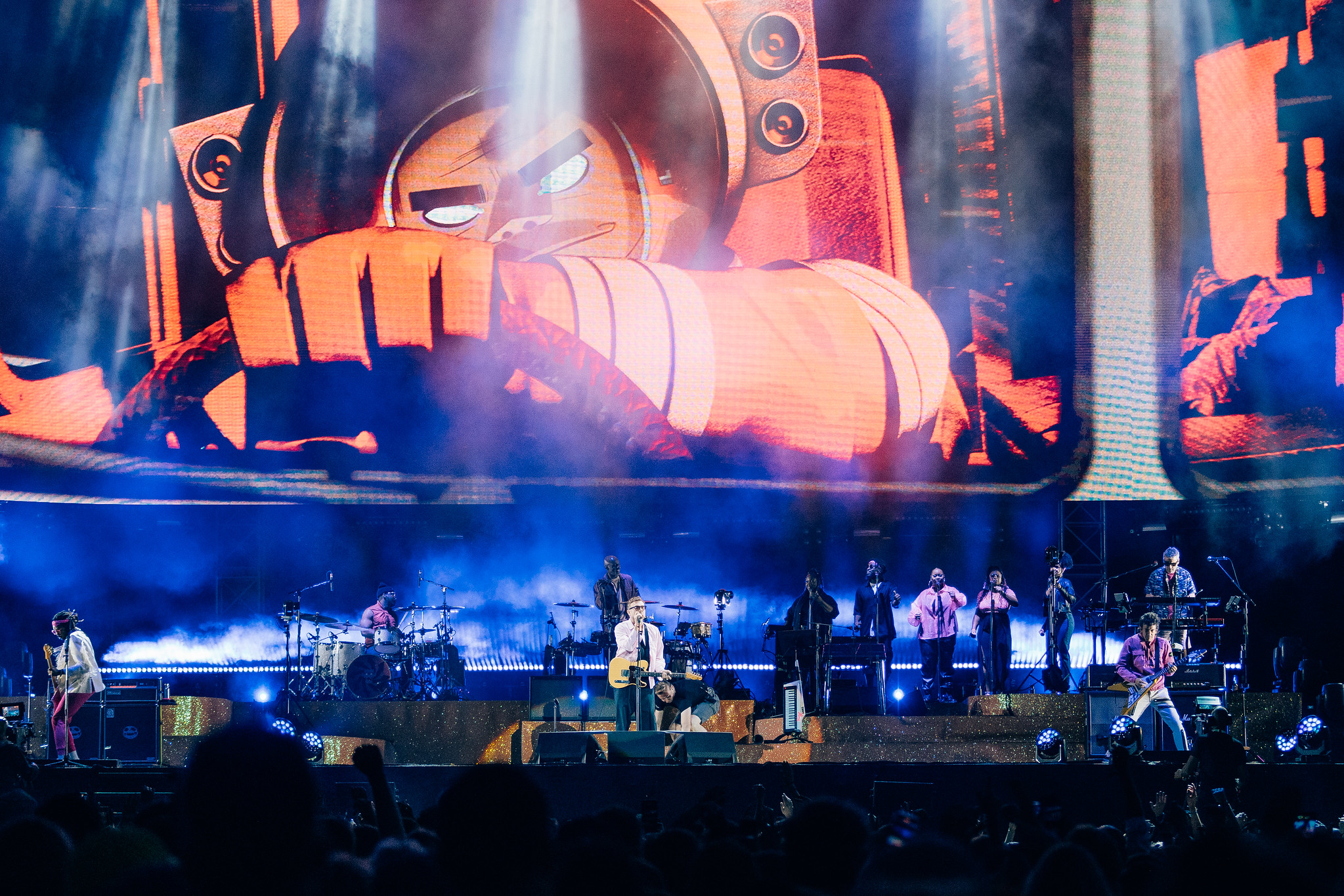 The setlist was nicely built, including songs from almost all of their albums but focusing on the self-titled, ‘Demon Days’ and ‘Plastic Beach’. After M1 A1, the set continued with a couple of mid-tempo tracks like ‘Strange Timez’ and ‘Last Living Souls’. The first louder appreciation came when the beginning of ’19-2000’ started playing. It felt that this was the moment when the crowd opened up. Maybe this was also seen from the stage since soon ‘Damon Albarn’ had a warm speech about magical Helsinki and some encounters he had in the city with friendly people. It was nice to hear some actual words from him instead of only ‘How are you doing Helsinki’ or ‘We are having wonderful time’ speeches.

Throughout the whole show, ‘Albarn’ and the rest of the band seemed to have a nice time, and even though they were having a long tour, they seemed very energetic. The great thing about Albarn is that even though he is a legend and has a long career behind him with ‘Blur’, ‘Gorillaz’ and multiple other projects, he still gave everything and was in physical contact with the crowd, and seemed playful.

Many songs had great live versions like ‘Rhinestone Eyes’, ‘O Green World’, and ‘Kids With Guns’. It is appreciable when the band doesn’t just play all like on the record, and this always makes live music sessions also much more interesting. ‘Bootie Brown’ had amazing energy on ‘Dirty Harry’ and ‘Stylo’ (on the encore set). ‘Kelvin Mercer’ aka ‘Pos’ from ‘De La Soul’ performed ‘Feel Good Inc.’ and gave a long encouraging speech reminding a bit from a gospel priest, making the crowd repeat what he said. But the real surprise was when ‘Freddie Gibbs’ walked onto the stage to perform ‘Cling Eastwood’. Part of the crowd went nuts, and his voice suited the live version perfectly. The two-hour set ended with the ‘Ed Case / Sweetie Irie Refix’ of ‘Clint Eastwood. This was a special moment for me personally. The track was part of my teenage years and brought up so many memories. It was a great way to finish the set that clearly many Finnish fans waited for years and years.

M1 A1 (What a perfect opener for the two hour set)
Strange Timez (Featuring Robert Smith on the screen)
Last Living Souls
Tranz (Damon Albarn gets connected with the group standing on the fence)
Tomorrow Comes Today
19-2000 (First bigger and louder reaction from the crowd when the song started)
Saturnz Barz (Featuring Popcaan on the screen)
Rhinestone Eyes (Some parts of the song were rocking really hard!)
Cracker Island (New single with Thundercat and fans seemed to love this one)
O Green World (Beautiful piano intro by Albarn while the heaviest parts of the song were almost intentionally chaotic. One of my favorites)
Pirate Jet (Albarn went to the crowd)
On Melancholy Hill (Crowd loved this one!)
El Mañana (Felt a bit disconnected just like on the album as well, but same time sounded really brilliant)
Empire Ants (The moment when the beat started hit soooo hard! Awesome! One of my favorites)
Kids With Guns (Massive ending!)
Andromeda
Dirty Harry (Featuring Bootie Brown live on the stage)
Momentary Bliss (Featuring slowthai on the screen)
Plastic Beach
----
The Pink Phantom (Featuring Elton John on the screen)
Souk Eye (This could work well with El Mañana)
Stylo (Featuring Bootie Brown live on the stage)
Feel Good Inc. (Featuring Pos live on the stage)
Clint Eastwood (Featuring Freddie Gibbs on the stage)
Clint Eastwood - Ed Case / Sweetie Irie Refix (Featuring Sweetie Irie on the stage)