At this point, the weather has been on the same side with the most of the biggest music festivals in Finland. Tuska Festival was not in a different position. The whole three days of the festival, the sun was burning the light and white skin of goths, headbangers, and other heavy music lovers. Tuska was another music festival in Finland that made a record with participants, having 49 000 metal fans joining the party. Tuska Festival has been organized since 1998 in multiple different locations in Helsinki, Finland. Since 2011 it has been organized in the Suvilahti event area, where also Flow Festival is set every August. Tuska is the biggest metal festival in the Nordic countries.

Deftones was one of the headlines of the festival and the same time, the last act of the whole weekend. While walking to the festival, it was easy to notice many people from the festival wearing band t-shirts, all black clothes, and corpse paints. But same time, there were also clearly just Deftones fans, who stood out quickly with their skater and stoner looks. I arrived at the festival area 40 minutes earlier and had time to go around the area a bit. Tuska stands out from other festivals in a simple way. At every other festival, there are many different corners with gelato ice cream, special coffee roasteries, and fancy art. Tuska area was simple, with no tricks, just obvious and easy to navigate but still offering all the necessities.

Before ‘Deftones’ I had time to check out a few tracks from ‘Lähiöbotox’, the Finnish ‘Body Count’. The guys looked sweaty and had a good time playing their cross-over thrash metal to the medium-sized crowd. After watching a few songs, I approached the festival's main stage. Everything seemed ready early on the stage, and soon the intro started playing, leading the way to the opener track ‘Genesis’. Slowly one by one, the members found their places on the stage. The guitarist of Deftones, ‘Stephen Carpenter’, was not playing on the tour. He stated earlier that he is unwilling to fly over the seas, with the world in this condition. ‘Carpenter’ is known from some conspiracy theories, which might have affected his choice. Also, the former bass player, ‘Sergio Vega’, was not on stage because leaving the band a few months ago. But the touring members, ‘Fred Sablan’ (bass) and ‘Lance Jackman’ (guitar), both did a great job. Of course, it would have been nice to see the original members of the band, but still I have no complaints against Sablan and Jackman. The second track, ‘Rocket Skates’ sounded good just like ‘Genesis’ but still felt a bit like warming up the crowd. 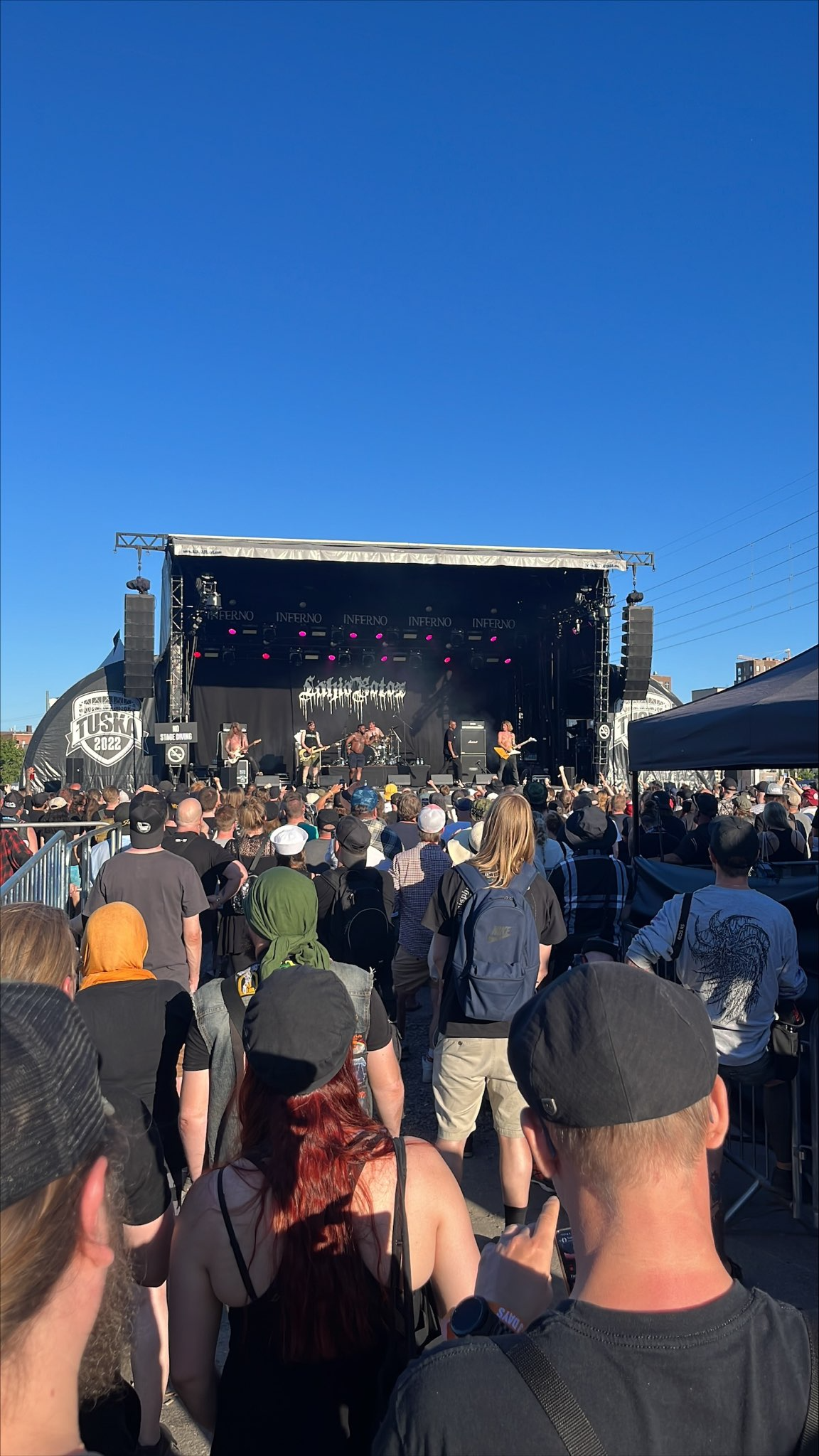 Band's second album, ‘Around The Fur’, turned 25 years this year; maybe because of that, they played most tracks from that album. The two following tracks, ‘Be Quiet And Drive (Far Away)’ and ‘My Own Summer (Shove It)’ made the crowd really explode. The first of those two suited nicely in the warm sunny evening while ‘Shove It’ sounded really aggressive and tense. It’s a great track on the album, but oh man, how good it sounded live with the massive sound. After a couple more tracks, it was time to chill down with one of the band's most known hits, ‘Digital Bath’, which again sounded great, but personally, I would want to see and hear this song in a smoky club rather than in a big festival stage.

‘Headup’ really bonded the variation of ‘Chino Moreno’s vocals. Throughout the set, I was amazed at how great ‘Moreno’ sounds live, especially with the most aggressive and high tunes. ‘You’ve Seen The Butcher’ was one of the highlights for me with the song’s low guitars and groovy tempo. Following the butcher, the band played ‘Sextape’, which also suited really well the surroundings with the clear blue sky. You could really smell the pot all over, too (even though it is illegal in Finland).

‘Change (In the House of Flies)’ was, of course, a part of the set, making people close their eyes and enjoy life. After finishing the actual set with the self-titled from ‘Ohms’ the rest of the band except ‘Moreno’ walked off stage. ‘Moreno’ looked happy, had a short appreciation to the crowd, looked almost touched in some way, and invited the rest of the band to play two old songs as an encore. The evening ended with such high energy with ‘Lotion’ and ‘7 Words’. It was great to see old (literally old) fans going crazy, joining the circle pit, and singing every lyric of these two tracks.

The challenge with such a band like ‘Deftones’ having a massive catalog is there are always songs in the setlist somebody would change. I also wished to hear some other songs, but all in all, the band sounded all the time great, ‘Moreno’ had 5/5 vocals, and even though there were two touring members, still the band seemed to have a really great, fun, and united time on the stage.