Here are the fundamentals if you're not familiar: Pedro Pascal plays Joel, a violent yet kind-hearted smuggler who lives in the zombie-infested end-of-days that has murdered almost everyone he has ever known.

While avoiding desperate survivors who would kill and even eat them if it suits, he reluctantly agrees to accompany 14-year-old Ellie (Bella Ramsey) across the now-barren wasteland of America. Why would Joel undertake this risky mission? Delivering Ellie to the appropriate experts might lead to the development of a priceless vaccine because she is resistant to the zombie infection.

If you haven't played the game yet, it is packed with gorgeous scenery and exhilarating action scenes. You may also travel by horseback and cars. Obviously, there are less battle sequences on television since no one wants to watch nine hours of pointless gunfights, but that isn't what The Last of Us is actually about. Its central theme is the moving connection, which is fueled in this instance by the chemistry between Pascal and Ramsey. Joel appears straightforward but is actually a hot emotional mess. 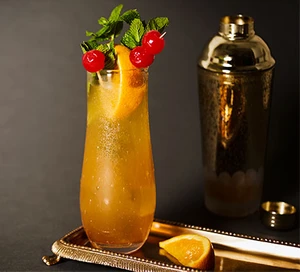 Blend white and dark rum with lime juice, pineapple juice and a splash of grenadine to make this ghoulish Halloween cocktail. Garnish with cherries and mint.

Ellie Ramsey, 19, transitions quickly from traumatized adolescent to exuberant class clown and back, displaying a startling range for her age. She injects much-needed humor into the program with her sardonic wit and sharp putdowns, and at times, she even manages to carry it on her own.

“We are thrilled to see fans of the series and game alike experience this iconic story in a new way, and we extend our gratitude to them for helping to make it a success.” - Casey Bloys, Chairman and CEO of HBO and HBO Max

With Pedro Pascal and Bella Ramsey in the lead roles, the video game adaptation's premiere attracted 4.7 million viewers (according to Deadline), making it the second-largest HBO program launch behind House Of The Dragon.

One of the best game adaptations so far, and if you're already familiar with the franchise you already know that the plot is amazing. It's really close to the cutscenes of the game and you can see the similarities done right.