The amount of people waiting to get into Target Field on Monday night was impressive to say the least. It’s been some time since I’ve seen that many people ready for a rock show and to say that it warmed my heart would be an understatement. Although it didn’t look super normal as about half the audience had opted to wear their masks and everyone was seen at the hand sanitizing stations after getting through security, there was something about the scene that made my heart flutter.

Coming out to The Specials’ “Ghost Town”, The Interrupters got the stellar night of music started off just the right way. Their upbeat ska sounds matched the blaring sun in all of the best ways. I swear that as they jumped into their first track, “A Friend Like Me”, the sun shined even brighter and you could feel the smiles grow on the audience member’s faces. This Los Angeles based band has been a favorite of mine for some time and I’ve seen them put the grind in so to see them opening up such a massive tour had to be one of my favorite moments of the night. It was a little sad to see many empty seats in the audience but a ridiculously early start time of doors at 4:30 and music at 5:30 is a hard thing to pull off on a weekday. Thankfully, it was quite evident that everyone who did catch this opening set had a great time and the roar of applause after the final note of “She’s Kerosene” was proof of that.

The second Weezer took the stage and opened their set with “Hero”, it was game over. The entire audience was singing along to every word of the banger after banger setlist this band performed.

Following The Interrupters was the almighty Weezer, or “The Weezers” as vocalist Rivers Cuomo introduced the band. What is there to say about this band that hasn’t been said before? Honestly, nothing but I really can’t stress the lasting power of this band and their timeless sound. The second this band took the stage and opened their set with “Hero”, it was game over. The entire audience (which had filled out quite nicely by the beginning of weezer’s set) was singing along to every word of the banger after banger setlist this band performed. From “Hash Pipe” to “My Name is Jonas” and all the way to “Buddy Holly”, Weezer proved on Monday night that they are far more than just a fad. Although it was super fun to hear some of the old hits that made Weezer an instant classic and force to be reckoned with, I really enjoyed hearing some of their newer material live. One of my favorite tracks that the band played on Monday night was “All My Favorite Songs”. This is definitely currently one of my favorite songs to listen to so it was a true treat to hear it performed live. 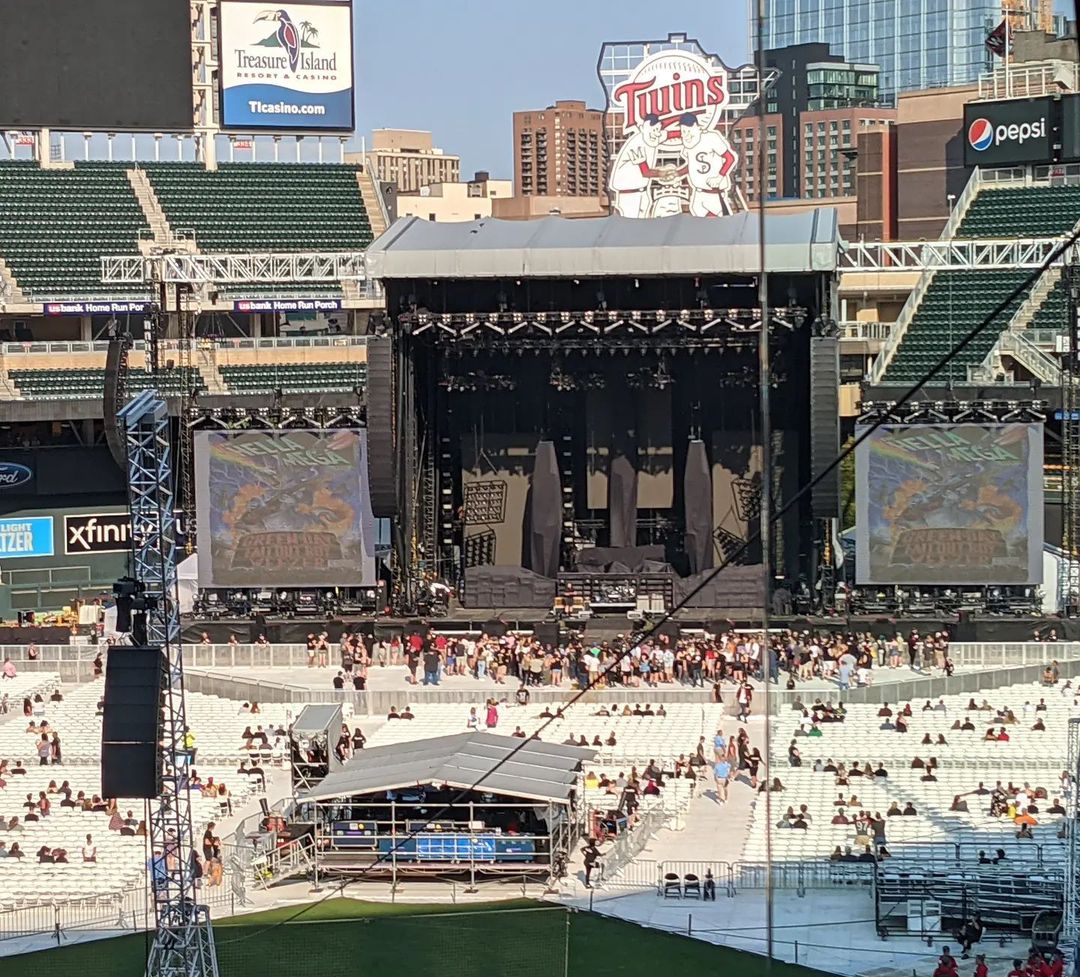 Like every time I’ve seen this band, I found myself completely stunned at just how many hits they truly have and how they were able to fit them all into their set. Beyond the perfection of their perfect setlist curation is their flawless sound. It’s almost too good to be true. Every note is perfectly placed and every word comes through loud and clear. Honestly, it’s just as good, if not better, than listening to a recording of this band. From their overall sound to their endless amounts of energy and quirkiness, it was pure bliss throughout all seventeen songs in their set.

Although the entire line-up of the Hella Mega Tour was pure fire, Fall Out Boy brought the real fire. Kicking their set off with “Phoenix” which came complete with fireballs galore, I found myself instantly reverting back to my angsty teenage years with this band that was so monumental for so many. Right off the bat, vocalist Patrick Stump proved that although the years have flown by, his vocal talent still reigns supreme. Sure, call them a fad, call them a pop-punk band that refused to move on. Regardless of what you want to call them, there’s no denying the staying power and true influence of Fall Out Boy. Although just seeing this band again for the first time in years was good enough for me, hearing some true classics was the icing on the cake. From hearing “Grand Theft Autumn/ Where Is Your Boy” to them closing with “Saturday”, I promise I wasn’t crying that hard. Even though for me, a highlight was hearing the classics, it was clear that the audience was eating up everything from old to new.

Patrick Stump took a seat behind a piano for “Save Rock and Roll” which was a truly dazzling moment of the night. Although not super dark as it was just slightly after 8PM, the twinkle of everyone’s cell phone lights waving in the air mixed with the pure tenderness and passion with which the song was performed was a truly stellar moment. I feel like I’m just completely gushing over Fall Out Boy and, sure, I’ll be the first to admit that that’s because of the haze of nostalgia I found myself in but, I truly can not speak highly enough of their high energy and flawless performance on Monday night. 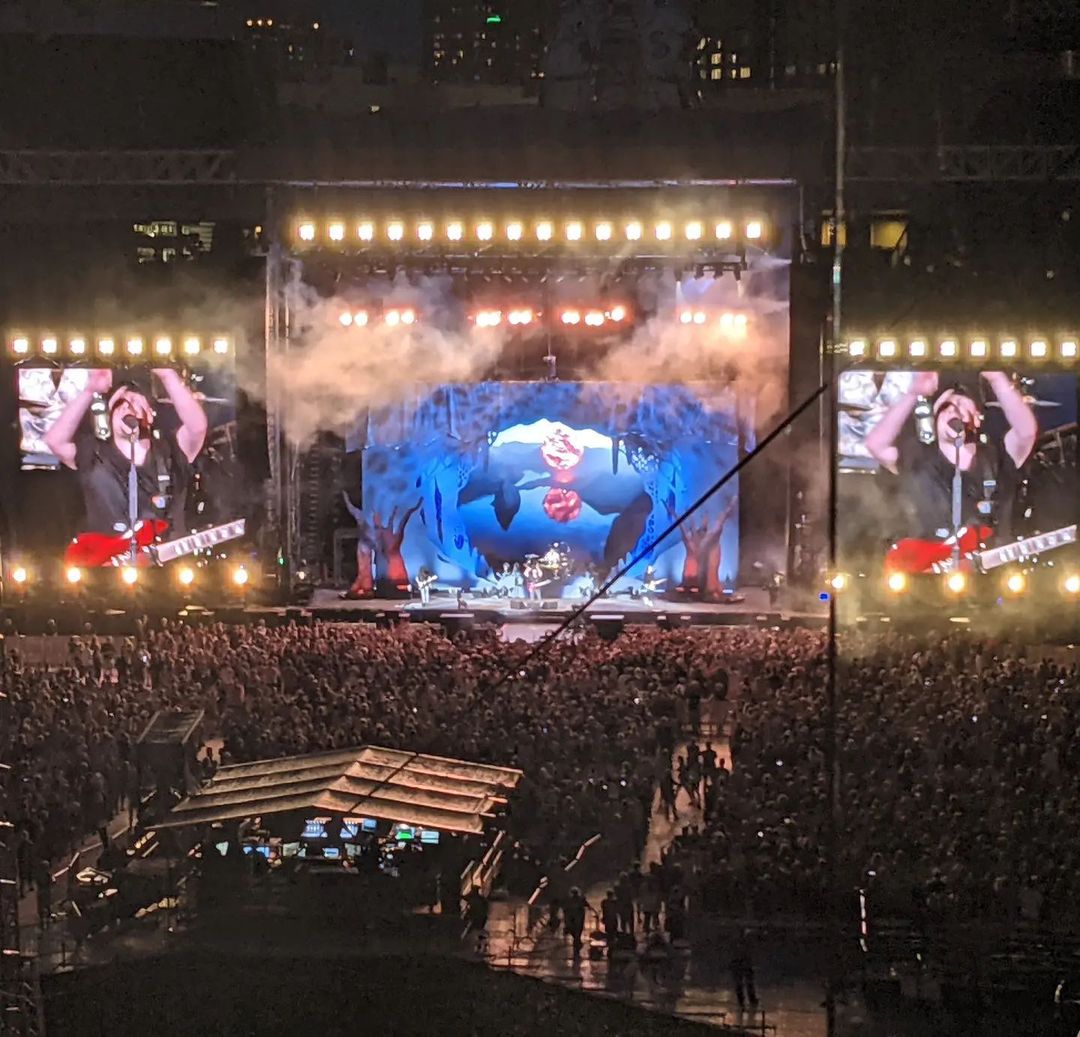 A solid ten minutes of curated tracks preceded Green Day’s headlining set. Starting with “Bohemian Rhapsody” which moved into “Blitzkrieg Bop” *which came complete with a dancing bunny) and then into more classic hits, to ay the audience was prepped and ready by the time Green Day took the stage would be an understatement. The band wasted no time and jumped right into their set first with “American Idiot”. Arguably one of their bigger hits, I was a little bit surprised to see them opening with such a powerful track but it made me so optimistic that we may hear some golden oldies from this band that has been killing it since 1987.

Green Day has been around for years and years. It has been nearly eighteen years since the last time I saw them live but, even with all of that time, nothing has really changed with this band. They still command an audience like it’s what they were born to do and they still have a sound that will influence musical acts for years to come.

Just like the other three bands on this epic tour, Green Day’s song choice was top notch. They absolutely gave the audience some throwbacks including a personal favorite of mine, “Minority” (yes, I know it’s not OG old but it’s a favorite of mine that I was super excited to hear live). The band also treated the overly excited audience to “Pollyanna”, their newest single that, although new and shiny, has a classic Green Day sound. Their “Rock and Roll All Nite” (yes, the KISS song), was an interesting choice in my mind but it was also perfect for the band and the overall mood of the night.

Green Day has been around for years and years. It has been nearly eighteen years since the last time I saw them live but, even with all of that time, nothing has really changed with this band. They still command an audience like it’s what they were born to do and they still have a sound that will influence musical acts for years to come. All of the bands that performed on Monday night have a flawless sound and an impressive stage show. From The Interrupters to Weezer to Fall Out Boy and all the way to Green Day– this really was a “Hella Mega Tour” and I am so thankful to have gotten to experience it. May I be so bold as to I say that I had the time of my life?

Average Age of the Crowd: 35

Crowd Surfers: 3 spotted through the cameras

Spotted Flying Through The Air: Drinks and a few bodies

Idiots Taken Out By Security: None Spotted

How Many Times I’ve Seen These Bands Before (or at least how many times I can remember):