I am the Unicorn Head are:

Kid A - It’s mid-afternoon for me, but one in a different time zone. Dragon Lords’ day is my night, and vice versa. I tested positive for Covid a couple of days ago, so I’m not going anywhere anytime soon! I have been double jabbed, and have no symptoms luckily. I have plenty of time on my hands, so I finished two song ideas Dragon Lord emailed me this morning. Also, lots of promo for our debut single!

DLA - A lot of things I write come from a starting point that is rhythmically focused because I consider myself a drummer at heart so when writing guitar parts I will usually have a particular rhythm or sequence of accents I am trying to adhere to. I also play a lot of acoustic guitar where the rhythms are very basic and my focus turns to find melody within a chord structure and let that sort of guiding me to where I want to take it next.

Kid A - We share files over the net, as that’s the only way we can exist as a band! It's a really fun way to work. To start with, we each sent each other around 5 tracks each that we had started work on. The recipient then added their sauce, and hey presto, our debut album was finished! We still write all the time though. I find that song ideas tend to pop into my head sometimes when I’m driving or in the shower. If I’m stuck for ideas, sometimes I load a song I like onto my laptop, divide it into sections, and use that as a template. I then make sure I change the BPM, chord progression, and melody, and see what new ideas I come up with. It’s never anything like the song that inspired me but can often end up as an interesting new track. I also like using royalty-free audio samples, of sound effects, spoken word, anything that catches my ear really!

Tell us a bit about your influences.

DLA - Creative thinking, the mystery surrounding the nature of reality, the chemistry of cognition, and progressive rock drums.

Kid A - A lifetime of obsessive music listening, and gig attending. I have collected vinyl records for many years, and spend much more time listening to them, than watching TV. The first two publications to feature us were a Prog rock magazine, and a Punk rock blog site. That’s kinda one extreme to the other, but that’s exactly what our band sounds like. Our music is genre hopping because we love prog rock, post-punk, punk, garage rock, alt, indie, jangle pop, Krautrock, anything else that grabs us! Good music is good music!

What instruments do you use to produce your music?

DLA - Bop drum kit in a tiny room, a hollow body guitar played too loud, and a digital piano. 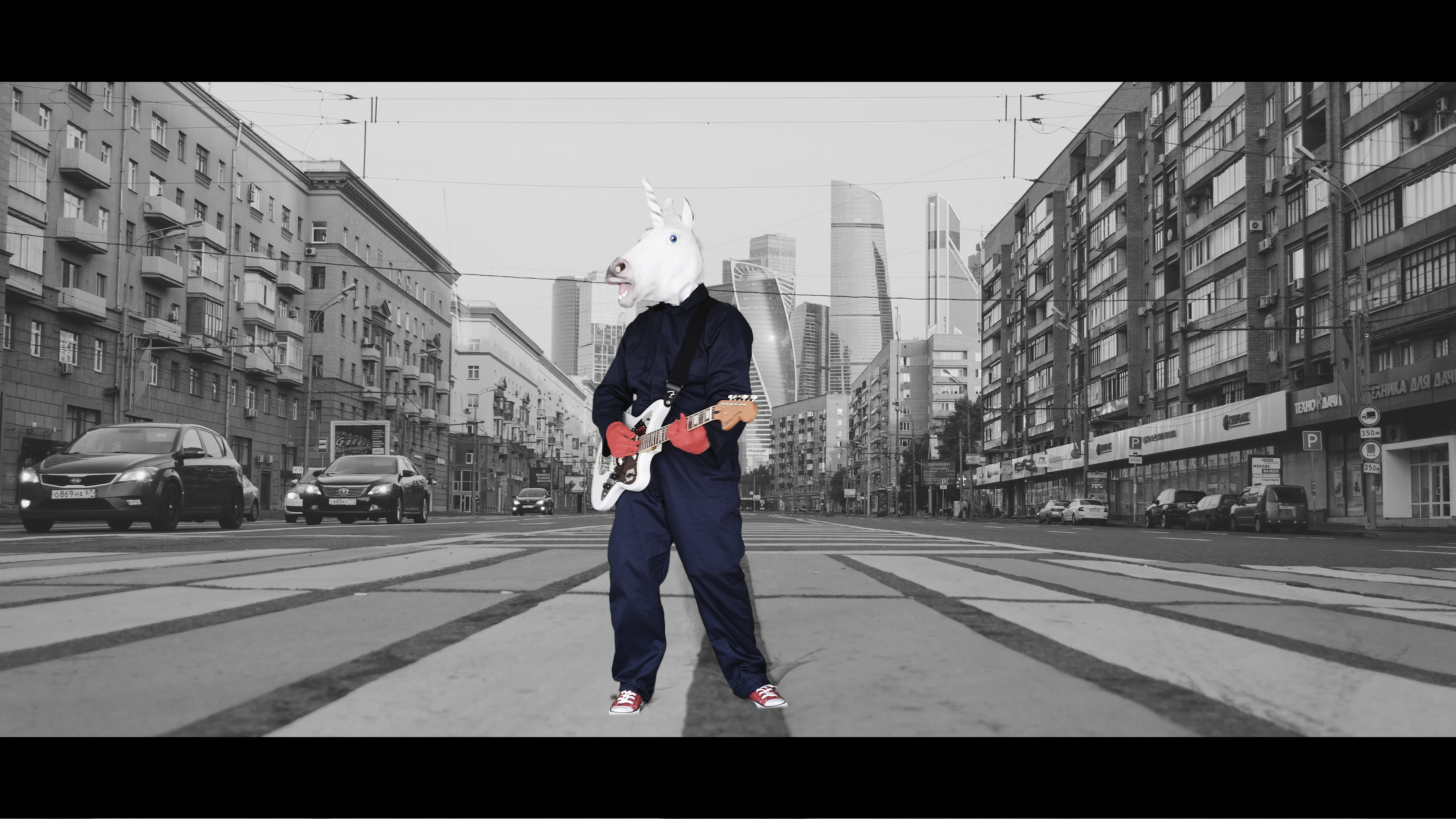 Who is responsible for your visuals?

DLS - Kid A is a visual master.

Kid A - You’re very kind! I’m no expert, but love to mess around with video ideas. Our videos are filmed in my kitchen, in front of a green screen. Filming is all done with my mobile on a tripod. I then hunt for royalty-free video clips online and mess around until I like something. More people should try the DIY approach. If you get stuck, there’s always a tutorial on Youtube! Visually we have another enormous challenge of course, in that we live in different parts of the world. Therefore, we can't play live, have band photoshoots, band videos, etc. We are also both reluctant to appear in front of the camera anyway. We decided the best way forward was to create a ‘character’ or ‘Avatar’ to represent both of us visually. We came up with the band name ‘i am the unicorn head’, and ‘Mr unicorn head’ to appear instead of us in all photos and videos. I think the band name and image are strong enough to make people remember us, whether they actually like the music or not!

DLA - The Unicorn came to me in a dream and opened a door. I decided to walkthrough!

Kid A - I am very pleased that having only formed in April, we are appearing inside and on the cover CD of UK’s PROG magazine in September! Frontpage national magazine coverage after existing for only 5 months is pretty cool! I subscribe to that magazine, so I can't wait for it to come through the letterbox!

I like weirdness and that is not always an appreciated trait. Eventually, instead of shying away from it, I decided to embrace it. I’m still waiting on the results

DLA - I like weirdness and that is not always an appreciated trait. Eventually, instead of shying away from it, I decided to embrace it. I’m still waiting on the results.

Kid A - Always the same for me. I can’t sing, so I need to collaborate with a singer/lyricist, and it’s hard to find a good one, on the same page as you. That’s why I was delighted when I put out a singer-wanted post on Reddit, and Dragon Lord replied! 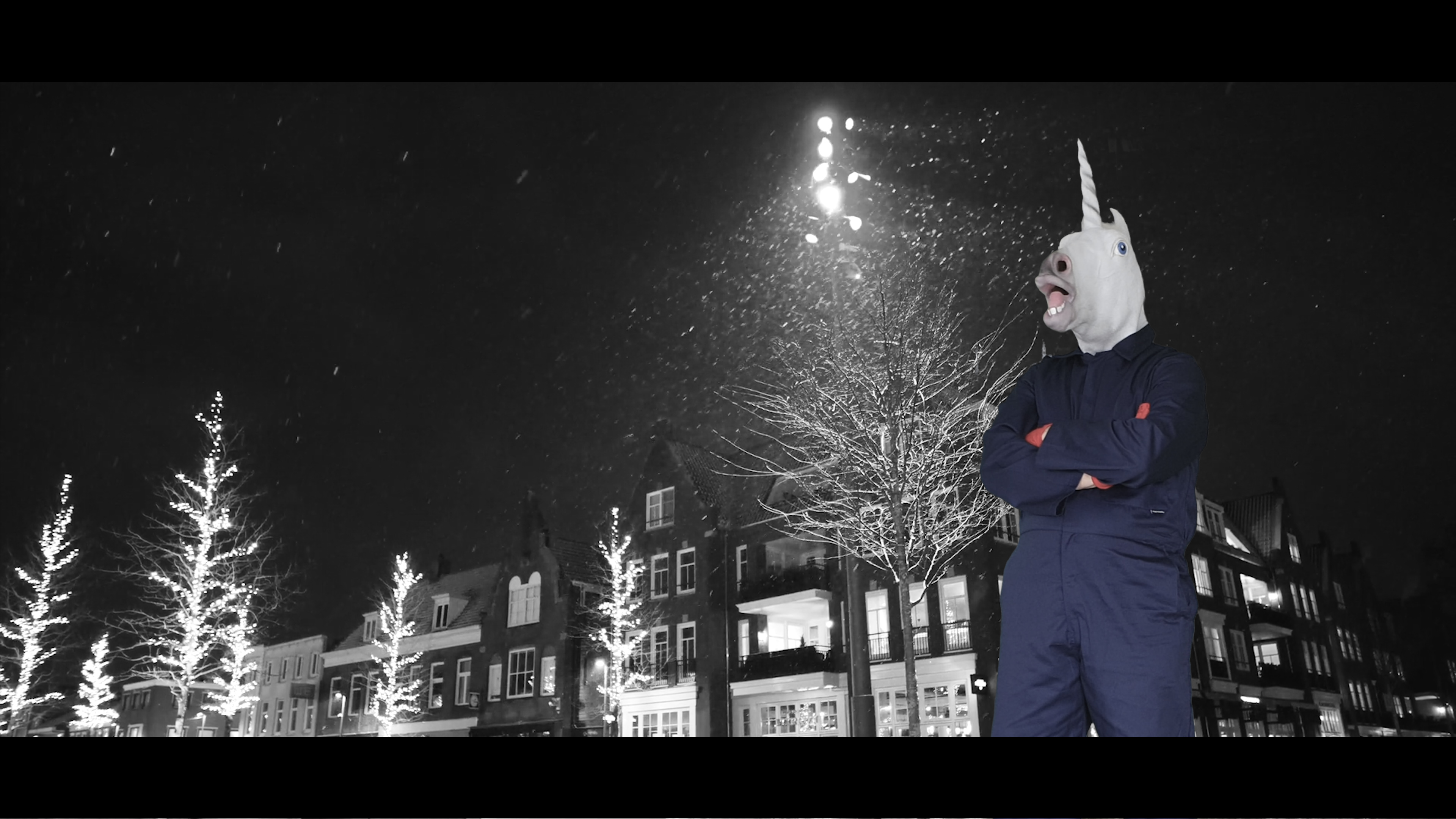 What do you think will be the future of music in terms of distribution and release in general?

DLA - I’d love to see a world where the personal information collected and sold in the digital realm to third party entities is given a value to be used by the consumer in the form of a digital currency which can then be used for payment for entertainment such as music, movies, and art. Then when someone streams a song by an artist then the artist can be paid directly and immediately by the listener. Instead of subscriptions and ad-based revenue, it would create an economy of direct payment between artist and consumer which would completely annihilate the need for an intermediary that eats up all profit of an artist's work.

Kid A - Yeah, I’d like to see record labels and streaming services pay artists properly. It’s only when touring stopped for Covid that you realize that outside of shows, musicians get paid very little( even if they produce outstanding work). I’ve been reading a bit about NFTs shaking up the music industry. It would be great if creators were able to take all the power back and grow their own ‘business’ without relying on anyone else. I understand there is an issue at the moment with NFTs being bad for the environment and global warming. Hopefully, a solution will be found, then I’d be interested at some stage down the line.

What do you think is the main problem with the music industry right now?

DLA - Artists who believe in their work have a blind spot for those who wish to take advantage of their ambitions. I’d like to see an industry that promotes music that pushes creative boundaries and seeks to speak to an audience in a transformative and honest way. Instead, I see an industry that wants to capitalize on artists desperate desire for success.

Kid A - I think we have very strong branding, with our name, image, and tag line ‘Follow the Unicorn!’. Our music is also pretty unique. We have one song about dinosaurs that is 1min 30 sec long and still features a spoken word section. We also have a nine-minute epic in seven parts, about the end of civilization as we know it! If you know any other band like us, I’d seriously be interested in having a listen!

Any funny incident that ever happened to you?

DLA - Nothing that comes to mind. Except for a bird once spoke to me and warned that the British were coming. The next day Kid A and I made the first contact.

Kid A - I saw a UFO once! I was driving at night with my mother, and she noticed it. It hovered close to us (and was silent) and then shot off like the end credits of Star Trek. It didn’t seem extraterrestrial though, it looked very much man-made. It was jet black, and we could only see it because the moonlight was catching what appeared to be a cockpit. It was quite close to a military base (where lots of UFO sightings occur). I’m sure some governments have high-tech capabilities that keep us in the dark about. That’s not to say they aren’t reverse engineered from actual alien crafts though!

DLA - We will be releasing our debut single on 18th August 2021, and then another 5 singles approx 6 weeks apart from each other. The singles will then be collected together, with new tracks, for our debut album, which will be called ‘Future Dinosaurs’.

We are unable to spread the word about ourselves by playing live as most bands can. We can’t hang around after shows and chat, so if any of your readers fancy saying hello to us online, that would be cool!  Join us on our exciting journey from obscurity to nowhere!

DLA - ‘Eating Cornbread in Quarantine’ is very meaningful for the band because it documents mental health issues during covid lockdowns, which the band formed to avoid. Available soon folk.

Listen to I am the Unicorn Head